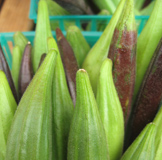 Okra, a gumbo staple, is wonderful pickled and has a flavor that works well when stewed with other summer favorites like tomatoes, peppers, and eggplant. The recognizable pod-shaped, okra fruit is harvested while the plant is still immature. And when cut, the fruit releases a sticky juice due to the mucilage in the plant. But this sliminess can be avoided by leaving the pod intact, slicing it thinly, or cooking it for a long time.

Okra is cultivated in warm, tropical climates and most likely originated in West Africa. It is one of the most heat and drought tolerant plants in the world and can continue to thrive in poor, dry soil. It is popular in Middle Eastern, African, and Japanese cuisine and is found in many traditional dishes along the Gulf Coast and southern parts of the United States.

While the pod is the most traditionally utilized part of the plant, the leaves can also be cooked like beet and dandelion greens. The seeds can be ground and used as a caffeine-free substitute for coffee and can also be pressed to create a flavorful, oil extract.