You are here: Home > Crops > Olives 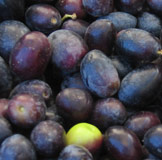 Forget about the simple sliced black olives you find on your pizza or the pimento stuffed ones in your dirty martini. While these may be the most recognizable olives in the bunch, there are actually thousands of known cultivars and in Italy alone, over 300 types are produced. With such abundance and popularity, it is no surprise that this fruit is one of the most written about plants in all literature. It appears in many classics, from the Odyssey to the Bible, and is often used a symbol for power, peace, and wisdom.

Beyond being the star of print, stage, and screen, the olive tree is also known as one of the heartiest, drough-resistant plants. It can live a very long time if pruned and cared for properly, and some of the trees in the Mediterranean have been around for several centuries. Olive trees prefer drier soils and warmer climates and as such, they are currently cultivated in the temperate regions of the Mediterranean, Chile, Australia, South Africa, and California.

The olive fruit, which is the part of the plant used for oil, is harvested during the fall season. Farmers use an array of techniques, such as limb-shaking and the tong-shaped oliviera, to safely remove the fruit. It then must be fermented and cured before being considered “palatable.” While the oil is most commonly used for cooking purposes, it can also be found in medicinal teas and is not being researched as a possible renewable energy source.