You are here: Home > Crops > Nettles 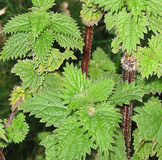 The word “nettle” describes over forty different flowering plant species from the Urtica genus – appropriately named after the Latin word “uro,” which means “I burn.” While not all nettle plants have poisonous barbs, the most well-known form of has stingers on its leaves and in its name.

The stinging nettle is native to Europe, Asia, Africa, and North America. It is distributed in all of the United States (except for Hawaii) as well as in Canada and parts of Mexico, and often shows up often at farmers markets during the winter, spring, summer months.

Nettles have long been used as a medicinal herb, treating arthritis, anemia, hay fever, and kidney problems. As a food, stinging nettles are also used as a substitute for more common greens (like spinach) in polenta, pestos, and soups as they have a similar, somewhat richer flavor. While soaking the nettles in water and cooking the plant will remove its characteristic chemicals, it is advised to use thick work gloves when picking nettles and de-thorning the leaves. Dried nettles are also quite popular in tea and can be found as a flavoring agent in some forms of cheese, such as Yarg and Gouda.