You are here: Home > Crops > Mushrooms 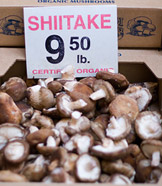 While the most recognizable version of this vegetable may be the simple, white button mushroom, there are over 14,000 species of mushroom which span a variety of shapes, colors, sizes, and flavors. The mushroom is classified as the fleshy, spore-bearing body of a fungus. They typically appear above the ground or on their food source and many have a cap, a stem, and/or gills.

Some mushrooms seemingly appear (and disappear) overnight, which led to the common phrase “to mushroom” in size. In reality, mushrooms typically take several days to form and this almost magical ability to expand quickly is a result of the rapid absorption of liquid.

Edible mushrooms are thought to have very little nutritional value, although some species are high in fiber. Most of the mushrooms sold at markets today are grown on mushroom farms and recently, more eclectic varieties (like oyster, enoki, hentof-the-woods, and shitake) are being produced locally as well.