You are here: Home > Crops > Blueberries 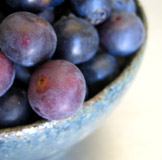 Blueberries are chameleons while they grow. They begin with a pale green flesh, then turn reddish-purple, and finally take on their famous purple-blue hue once they are ripe. Blueberries are equally adaptable after they are harvested and are found fresh or frozen, in whole form or as purees, jellies, and jams. This super food is also linked to lower risk of high cholesterol, cancer, and cognitive degeneration.

Blueberries are one of the few commercially grown fruits native to North America. While they were a traditional ingredient in Native American cooking and a part of colonists’ diets, blueberries were not widely cultivated for sale until the early 20th century. Today, North America is the world’s leading blueberry producer, accounting for nearly 90% of global production. California ranks sixth among states growing the berries for fresh consumption.

To pick the best blueberries, look for berries that are firm. Shake the container (very gently) to see if the berries move freely. If they clump together, it is a sign that they are old or damaged. Blueberries will last for a week when kept covered in a refrigerator or for up to a year if frozen.