You are here: Home > Crops > Avocados 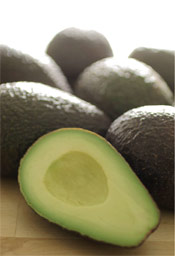 Avocados are thought to have originated in Mexico, though their exact genesis is unknown. Like corn, figs, sugar cane and other ancient crops, the avocado is a cultigen: a species domesticated so long ago (around 7,000 years in the case of avocados) that has undergone such dramatic changes that its wild ancestor cannot be determined. Whatever the original source, most agree that cultivated avocados originate from three different regions: Mexico, Guatemala, and West India.

The rich fruits were first introduced to California in the late 1800s and have steadily grown in popularity. By far the most prevalent variety of avocado is Hass (which, contrary to popular belief, rhymes with glass). The Hass variety originated from a seedling purchased from avocado pioneer A.R. Rideout by a postman named Rudolph Hass. According to the California Avocado Commission website, “He planned to graft another variety on it, but when repeated grafts didn’t take he planned to cut the tree down. Fortunately for avocado lovers everywhere, Hass’s children talked him out of it. They preferred the taste of the tree’s fruit to that of the Fuerte, the predominant variety and industry standard in those days.” Hass patented the new variety in 1935 and made a deal with nurseryman Harold Brokaw: Brokaw would propagate and promote the variety and give 25% of the proceeds back to Hass. Brokaw’s success in his venture is astounding; about 95% of the avocados grown in California today can be traced back to Hass’s “Mother Tree.”

In the 1950s, Harold’s nephew Hank and his wife Ellen decided, for fun, to start their own small nursery. The subtropical nursery stock they grew was in high demand, and Brokaw Nursery soon expanded to be the largest distributor of subtropical stock in California. Will Brokaw, Hank and Ellen’s son, manages farmers’ market sales of fresh fruit for Brokaw Nursery. He says his parents foresaw the “avocadoization” of California, a phenomenon that began in the 1970s.

At the farmers’ market, shoppers will find a diversity of avocados. Bacon, Fuerte, Pinkerton, Zutano, Gwen, Reed, Nabal, Esther, Lamb Hass, Jim, Mexicola, Stewart and, of course, Hass varieties are available most of the year, though each variety has its own season. The varieties vary more in characteristics like seed size, peel-ability and oil content than they do in flavor.