You are here: Home > Crops > Walnuts 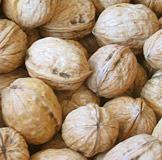 Walnuts are the oldest nut known to man, dating back as far as 10,000 BC. Excellent chopped, toasted, or glazed, the walnut, with its rich and satisfying flavor, lends itself just as easily into a roasted beet and goat cheese salad as it does into a dark chocolate brownie.

In ancient times, walnuts were a symbol of the intellect, as the intricate convolutions and shape of the nut resembles that of a brain. At that time, however, no one knew that walnuts were actually one of the healthiest natural brain foods in existence. Because of the high levels of omega-3 fatty acids in the walnut, studies prove that this nutrient-dense food can actually improve brain function, promoting fluidity in brain cell membranes and increasing their ability to transmit signals to one another. In addition to being a brain-healthy food, walnuts also contain higher levels of cancer-fighting antioxidants than any other edible nut.