You are here: Home > Crops > Tomatoes 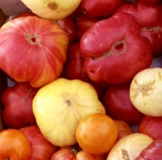 Whether or not there’s any truth to the centuries-old notion that the tomato is an aphrodisiac, there’s a lot to love about the varieties of tomatoes available at farmers’ markets today. In red, yellow, green, shades between, speckles, and stripes, tomatoes at their peak production present seemingly too many choices. The names of the varieties are equally intriguing and colorful: Black Prince, Early Girl, Mortgage Lifter, Green Zebra, Ivory Pear, Pineapple.

These are only a few of the possibilities. Ed George of The Peach Farm, who grows more than 100 varieties himself, says he’s seen lists of at least 500 heirloom tomato varieties.

Farmers’ market shoppers have help with the dilemma of abundance: the person who grew the tomatoes is often there to answer questions and offer advice on selection. When asked which tomato is best, Bill Crepps of Everything Under the Sun responds with a question of his own: What are you going to do with it?

For slicing, he suggests the Marvel Stripe, a meaty tomato. For a strong-flavored sauce, Crepps advises, “You can’t beat an Early Girl.” That’s also his pick for gazpacho. The Early Girl, he says, gives the soup its classic, sharp tomato flavor.

Crepps acknowledges that customers often gravitate toward heirloom tomatoes, viewing these open-pollinated varieties as traditional and authentic. In response, seed companies have made more heirlooms available to farmers. But there simply isn’t a “best-tasting” tomato. As The Peach Farm’s George says, “You take 100 people, and they’re all going to like a different one. The tomatoes are all good in their own way.”