You are here: Home > Crops > Radishes 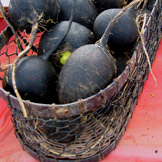 Purple, white, red, and black – radishes come in many shapes and sizes. As a member of the Brassicaceae family (along with cabbage and cauliflower), the radish is an edible root plant which was originally domesticated in Europe. The latin name for the vegetable comes from the word “radix,” meaning “root.” And the Greek name for its genus is “Raphanus,” which translates to “quickly appearing,” referring to the plant’s quick germination cycle. Due to its rapid maturation (many varieties are ready for harvest in a matter of weeks), the radish is a popular plant for children’s gardens. They grow best in the sunlight and sandy soils, and like other root crops, they thrive in soil that has been tilled. However, radishes are often used in untilled pastures to reverse the effects of compaction.

While the taproot of the radish is the most popular part for cooking, but the rest of the plant (leaves and stem) can be eaten as well and are often prepared like other leafy greens. Radish varieties are broken down by season – winter, spring, summer, and fall. The spring and summer varieties are generally smaller and have a three- to four-week cultivation cycle. They include the white-tipped French Breakfast radish and the Easter Egg radish, which comes in several different colors. Winter and fall radishes include the spicier, rough-skinned black radish as well as daikon, which is commonly used in Asian cuisine.