You are here: Home > Crops > Pomegranates 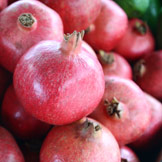 Owing to their ancient origins, sanguine insides, abundant seeds, and sweet-tart flavor, pomegranates hold a prominent place in religious and mythical symbolism. When you pry open a pomegranate, it is immediately clear why they have come to represent fertility: hundreds of glistening scarlet sacs (called arils), each containing a seed, nestle inside their leathery skin.

Pomegranates are said to symbolize death, longevity, paradise, and temptation. In Ancient Egypt, pomegranates were buried with the dead to aid in their passage to the afterlife. In Christianity, the fruits represent Christ’s suffering and resurrection. Islamic tradition orders that every single aril of a pomegranate be eaten, because one in each fruit comes from paradise. In Judaism, it is said that each pomegranate contains 613 seeds for the 613 commandments in the Torah. Buddhists regard pomegranates as one of the three blessed fruits, along with citrus and peaches. Some scholars even think that it was a pomegranate, not an apple, that enticed Eve in the Garden of Eden.

In the Greek myth of how the seasons came to be, Hades, the god of the underworld, abducts Persephone, daughter of Demeter and Zeus. Zeus retrieves his daughter, but before she leaves the underworld, Hades offers her a pomegranate. Her ingestion of three arils binds her to spend three months of every year with Hades. Demeter, the goddess of fertility, refuses to let anything grow during those months, thus creating winter.

Pomegranate trees originated in the Fertile Crescent, where they were first domesticated in ancient times and grow wild to this day. They spread throughout Africa, Asia and Europe and were brought to California by Spanish missionaries in the 1700s. Many of the missions still have pomegranates in their gardens, some of which are believed to be the original missionary plantings.

Despite their prominence in history, mythology, and Middle Eastern cuisine, pomegranates did not enjoy much reverence in the United States until recently. In a Los Angeles Times article, Regina Schrambling made an apt analogy: “[pomegranates] are the crabs of the produce aisle, wondrous to eat but a messy hassle to break down to extract that wondrousness.” One might well guess why the fruit languished in America’s culture of convenience. But in 2002, some fresh findings about the health benefits of pomegranates, an enormous marketing campaign, and a faster way to consume the fruit catapulted it into eminence. Pomegranate juice suddenly became a popular beverage, health food, cocktail ingredient, and even a Starbucks Frappuccino flavor. The fruit, previously utilized more as décor than food, is finally enjoying the American limelight.