You are here: Home > Crops > Plums 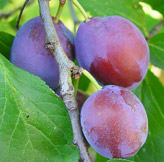 The plum tree is a member of the genus Prunus, which also includes peaches, apricots, and nectarines. This grouping of fruit is more commonly referred to as stone fruit, a name that is derived from the hard pits that cover their seeds.

Over 2,000 varieties of plums exist, each with a diverse set of shapes and colors, and they are divided into the following six categories – Japanese, American, Ornamental, Damson, Wild, and European. Japanese plums are the most familiar and widely sold fresh-eating plum. They are round or heart-shaped with a dark red or peachy-yellow flesh. Though the fruit originated in China, it was the Japanese who began to cultivate and further develop this particular variety, thus winning naming rights. The European varieties were discovered 2,000 years ago and tend to be smaller and more oval in shape and are commonly dried and used to make jams and jellies.

The United States is the second greatest producer of plums, with China ranking first, and California produces over 95% of US plums. Plums that are harvested for fresh-eating must be hand picked, but those that will be used for canning or drying can be collected by a shake and catch method. When selecting fruit, ripe plums will feel soft when given a gentle squeeze.