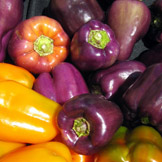 The sweet pepper, or more commonly referred to as the bell pepper, is a member of the capsicum family. Its name was given by Christopher Columbus who naturally, but mistakingly, associated it with the peppercorn (an unrelated plant), as Europeans often did with many fruits and vegetables that had a slightly spicy taste. Unlike other members of the capsicum family, the sweet pepper does not contain capsaicin, which is the chemical responsible for the spicy heat of the chili pepper, and thus has a sweeter, more mild flavor.

While the US commonly refers to this culinary vegetables as a “pepper,” many other countries refer to it as “paprika,” like the spice that is created from the dried plant. Green peppers, or green paprikas, are the unripe form of the fruit and although they may taste more bitter, they are still edible. The colored varieties, which come in shades of yellow, orange, red, purple, and rainbow, tend to contain more nutrients and vitamins, and the red pepper has twice the vitamin C than its greener sibling.