You are here: Home > Crops > Pears 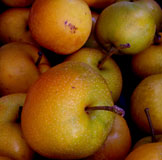 Pears have been grown in California since the Gold Rush. The fruit originated in Eastern Europe or Asia Minor, and it has been cultivated since prehistoric times. Members of the family Rosaceae, pears have many sweet edible kin, among them apples, loquats, strawberries, almonds, apricots, cherries, nectarines, peaches and plums. Pyrus communis, the classic European pear, gained popularity in Italy and France during the Middle Ages, and the number of varieties steadily increased. In the 1600s, a Massachusetts company ordered pear seeds from a British seed company, and their cultivation in the US began. Western coastal states now produce most of America’s pears, primarily Bartlett and Bosc varieties.

Pears, wine and cheese are a classic combination. Here are some suggested pairings for pear varieties and cheeses you can find at the Ferry Plaza Farmers Market, with wines that are produced locally.

Bartlett pears with triple-cream cheese like Mt. Tam or Red Hawk and a sweet Muscat wine