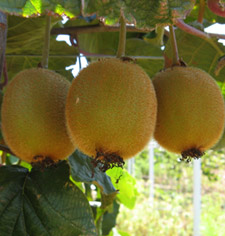 Plain and brown on the outside, emerald green on the inside, kiwis are the geodes of the fruit world. The sweet gems make their appearance at California farmers’ markets just in the nick of time –- right when the pomegranate and persimmon seasons have faded and committed locavores have prepared themselves for several puckered months of citrus eating.

Much like apples and pears, which are available from cold storage well into spring, kiwis are a nice alternative to imported fruit during the winter months. What we now call kiwi or kiwifruit was long referred to as “Chinese gooseberry” in New Zealand, where the fruit flourished after being brought from China early in the last century. In the 1960s, when the then-exotic fruit was introduced in California, it was dubbed the kiwi after the national bird of New Zealand.