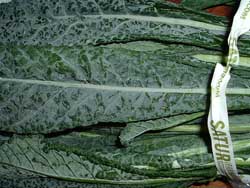 As a distinguished member of the Brassica family, kale is a form of the cabbage plant. Like its more bulbous relative, kale is an incredibly hearty and healthy plant. But in terms of looks, the kale plant produces longer, leaner central leaves that never form a head.

Kale leaves can range in color from light-green to dark, violet-green and they come in many varieties, including curly leaved and flowering cultivars. And because some types of kale can grow successfully in the winter, one variety is commonly called “Hungry Gap” in reference to the period of the year in which very few vegetables can be harvested.

Kale can be eaten raw (adding a punchier flavor to salads) or cooked. It is a staple ingredient used around the world, appearing in traditional dishes from East African stews to Irish mashed potatoes. Flowering, or ornamental, kale can be eaten as well, but it is often used for decorative purposes.

When choosing your kale, look for crisp stalks and un-wilted leaves. Kale can keep for up to a week when wrapped in a paper towel and stored in the refrigerator. Kale can also be frozen and will often develop a sweeter flavor from the frost.