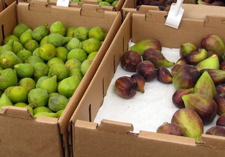 The genus Ficus encompasses over 800 plant species, the most well-known of which is Ficus carica, which creates the edible fruits found at the farmers market. While most people in this country have tried Fig Newtons, and some know figs for their place in literature and mythology, many have never bitten into a fresh, ripe fig. But in California, where figs thrive, they are a common backyard tree and a familiar sight to farmers market regulars. The fig’s plump, slippery sweetness teases us at the beginning of summer and overwhelms us at the end.

Indeed, many fig varieties have two distinct harvests. The first harvest, which happens in June, is called the breba crop. The fruits of this harvest tend to be less sweet and more acidic than the flavorful main crop, which is larger and lasts longer.

The fig’s dual harvest is not the only thing that makes it botanically unique. What are commonly considered the tree’s fruits are actually inverted clusters of hundreds of tiny flowers. The true fruits of the fig are the crunchy things that many refer to as seeds. The unusual structure of this pseudo-fruit is the result of thousands of years of coevolution with the fig’s pollinator.

In the wild, the symbiosis between figs and wasps is a marvel. Miniscule fig wasps hatch inside figs, immediately mate, and then dig a small hole to get out of the fig. Male wasps, which have no wings, die after helping the females burrow out, and females fly away, covered in the pollen of the flowers inside the fig in which they were born. The females then find a new immature fig in which to lay their eggs. They enter the fig by way of a small hole called the ostiole, lay their eggs (inadvertently pollinating the tiny fig flowers), and the cycle repeats.

Though some commercial fig varieties depend upon this miraculous process, most develop fruit without pollination. Recent archaeological findings indicate that even the very first cultivated figs (which are now thought to be the first cultivated crops) may not have required pollination. Early agriculturalists in Western Asia may have recognized this convenient mutation and started propagating trees using cuttings over 11,000 years ago. Figs spread to the Mediterranean and were brought to California in 1759 by the Franciscan monks of Mission San Diego. They were subsequently planted at all the missions along the Camino Real. One of the most popular fig varieties, Black Mission, gets its name from this history. It took over 100 years for a commercial fig industry to develop in California, and today we are the only state with significant fig production.

Still, a fresh fig can sometimes be hard to find. The fruits pose problems in the industrial food system because they must be picked soft and are extremely delicate. Since they don’t stand up well to transport and storage, the majority of California’s fig production is sold dried. The fig’s perishability makes it a perfect candidate for direct marketing. Farmers selling their crop straight to eaters can pick fruit the day before market. This is what Knoll Farms has been doing with success for over 20 years. Kristie Knoll says figs are a reliable crop for the farm and that most varieties grow very well in their Brentwood soil.

The fig harvest is at its peak in September, but some figs may be available as late as November. You can combine this succulent fruit with other foods in various recipes, or just enjoy the fig’s mythic, historical, and botanical significance and its unadulterated, alluring flavor by eating it plain!