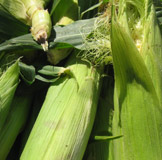 Native to the Americas, corn is thought to have originated in either Mexico or Central America. Corn has played and still continues to play a vital role in the livelihood of many native cultures. It has been utilized for not only sustenance but shelter, fuel and more. Corn is known scientifically as Zea mays. This reflects corn’s traditional name, maize, by which it is known throughout many areas of the world.
In addition to the yellow and white sweet varieties, there are many kinds of flour corn, including red, blue, pink and black. Buy sweet corn that has been stored in a cool or shaded place; heat and/or direct sunlight rapidly converts the sugars in the kernels to starch. Look for corn with fresh, green husks. They should envelope the ear and not fit too loosely around it. Examine the kernels, pulling back part of the husk; they should be plump and tightly arranged in rows.
Store corn in a plastic bag in the refrigerator for up to 3 days, but don’t remove its husk since this will protect its flavor.
Fresh corn has a fairly short season in the Bay Area. To freeze the cob or kernels to use later in the year, blanch for about five minutes first. For broiling or barbequing, leave the husk on the corn, but soak the husk in water first to protect from burning.