You are here: Home > Crops > Cherries 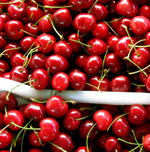 A bowl of jolly, shiny cherries is such a visual delight that they feed the spirit before they ever hit your mouth. That said, cherries don’t wait for much gazing. With their relatively brief season and short shelf-life, they demand prompt and concentrated consumption. That’s no hardship, of course, given how irresistible they are.

The cherry’s name has been linked to Cerasus, a Turkish city now known as Giresun, and earlier to the Greek root kerasos. Turkey was the original exporter of cherries to Europe, and French settlers brought them to America in the 1600s. Turkey remains a top exporter of cherries, along with the United States.

Between the two types of cherries–sweet and sour–you will mostly find the former at the Ferry Plaza Farmers Market. But within the sweet category lies a dizzying array of colors and tastes, from rich crimson to blushing sunshine, lushly sweet to pleasantly tart. California ranks second in US sweet cherry production, behind Washington, and farmers market visitors are treated to our state’s abundance from early May through June.

Cherries can be a challenge to farm; they are vulnerable to too much rainfall (not uncommon during the spring months when they are ripening on the trees) and are easily bruised.

If you can resist popping them into your mouth one by one until they’re gone, cherries present a number of possibilities in the kitchen. While the most obvious of these is in a dessert such as pie or clafoutis (fruit baked in a batter), cherries make terrific adornments for salads. They also perfectly complement meats such as pork or chicken. While some cooks swear by a cherry-pitter to ease prep work for recipes, other implements will do. Using the tip of a pastry bag and a sturdy straw or a slender spoon handle, you can push the cherry pit through the stem-end, from the bottom.

When shopping for cherries, seek out firm, plump fruit with unblemished skin and the stem intact. Cherries will not ripen once picked, so eat them as soon as possible after buying them to get the best flavor. For those who can’t get to them right away, chef Eric Gower recommends putting cherries in a plastic bag together with a damp paper towel, then stowing in the refrigerator’s crisper.

If you’re confounded by the varieties of cherries on offer at the market–Bing, Brooks, Tulare, Rainier and others–there’s only one way to be sure which kinds you’ll like: taste them. Yuk Hamada should know; at Hamada Farms, he grows 20 types of cherries. His favorite? “Brooks is the best tasting cherry of all,” he says.