You are here: Home > Crops > Chard 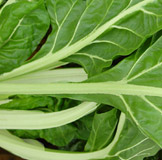 Also commonly called “Swiss chard,” this leafy green is not from Switzerland at all, but was given its scientific name by Swiss botanist, Karl Heinrich Emil Koch. The French called it “carde,” because chard’s stalks have a similar appearance to cardoons.

Chard is a tall vegetable, with a thick, crunchy stalk. Chard has wide, fan-like leaves attached to the stalk, which come in a variety of colors including white, red, yellow and orange. Select chard with stalks that look crisp. To remove any sand or soil between the leaves, immerse them in a bowl of cool water. Unwashed chard can be stored in a plastic bag inside the refrigerator for up to 5 days. Chard can be eaten raw, but cooking chard makes it sweeter and less bitter. Don’t cook chard in an aluminum pot; the vegetable has oxalates, or acids that will react with the metal and cause the pot to discolor. Blanch chard to retain the vibrant color, then add it to soups, stews, and stir-fries.