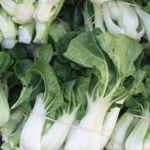 Part of the cabbage family, bok choy has a mild flavor and a tender texture. Originally cultivated in China during the Ming Dynasty for its medicinal properties, bok choy is now grown in North America and Europe. The Chinese translation of bok choy means “white vegetable,” which describes the hearty stalks, but its different varieties display other colors. Baby bok choy — which is smaller and more tender — has green leaves, and shanghai bok choy — which is larger — has pale green and yellow leaves.

Select bok choy stalks that are pure white and firm, and look for leaves that are brightly colored and not wilted, brown spots on its leaves or stalks can be trimmed and indicates bruising. Store washed bok choy in a plastic bag or crisper in the refrigerator, away from the light, for up to four days. Cook baby bok choy whole by steaming, boiling, or sautéing, and mature bok choy can be chopped or shredded to add into soups or stir-fries. Bok choy can also be used as an ingredient in Korean kim chee.