You are here: Home > Crops > Artichokes 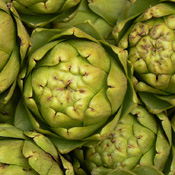 It’s easy to forget that artichokes are largely a California phenomenon. Any dinner guest from outside the state will remind you of this: just notice the bewildered look on their faces as the artichoke is placed in front of them, followed by, “How do I eat this?” This is not an unreasonable question. In fact, the scaly looking vegetable is the bud of a mostly inedible thistle flower.

Artichoke consumption is an art: one scrapes the edible parts off of the many petal-like leaves (called bracts) folded around the bud, removes the then-exposed spiny florets at the base (also known as the choke), and eats the fleshy, flavorful heart. Observing the hedonism with which his fellow Romans devoured artichokes, Pliny remarked, “thus we turn into a corrupt feast the earth’s monstrosities, those which even the animals instinctively avoid.”

Despite Pliny’s grievances, artichokes have allured humans for more than two millennia. Thought to have originated in North Africa, where it is still found as a wild thistle, the artichoke traveled across the Mediterranean, seducing the Greeks, Romans and eventually Catherine de Medici, who popularized it in French cuisine. However, it remained unknown on this continent until a group of Italian immigrants planted a few hundred acres of the crop near Half Moon Bay in the late nineteenth century.

Quickly, artichokes became a popular delicacy in California and filled fields in Monterey County, where the temperate climate and deep, fertile soils provide a perfect growing environment. By 1920, farmers were shipping crates of artichokes by rail to the East Coast where their popularity exploded. Ciro Terranova, a member of the New York mafia, began cornering the artichoke market by buying all the crates coming in from California and reselling them at a 30 to 40 percent profit. Known as the “Artichoke King”, Terranova kept his profitable monopoly through intimidation of distributors, merchants and even growers. These “Artichoke Wars” escalated to such a degree that Mayor LaGuardia declared artichokes illegal in New York. However, LaGuardia himself could not resist the allure of the artichoke and after one week lifted the ban.

Fifty years later the artichoke was once again under scrutiny, this time not by gangsters and politicians but gastronomes. James Beard in a 1971 issue of Gourmet Magazine wrote, “There is a great feeling among serious wine drinkers that artichokes spoil the flavor of fine wines and therefore should be forbidden at great dinners.” His complaint was that a certain sweetness lingered on the tongue following its consumption. Artichokes contain a unique organic acid called cynarin, which stimulates sweet receptors on the palate, changing the character of subsequently consumed food and drink. Could this sweetness be part of the artichoke’s allure?